The Three-fold Mission of Jesus

On February 2, 2018 by Marilyn Black With 0 Comments - Uncategorized

What was Jesus’ mission on earth?  What were the chief reasons for His coming?

There are three main reasons why it was imperative that Jesus leave His heavenly abode and come to the earth.  Without His coming, the original plan of God could not be completed.  At the completion of creation (beginning at Genesis 1), the power of the Kingdom was invested in the hands of Adam and Eve, the first created beings.  After Adam and Eve committed sin by disobeying God’s command not to eat from the forbidden tree, The Kingdom and its power and authority was usurped from them by God.  Therefore, since the fall of Adam and Eve,  the Kingdom of Heaven had been absent from the earth.

Reason #1 – Jesus came to re-introduce the Kingdom – When Jesus began his ministry on earth, the first message He brought to the people was, “Repent! for the Kingdom of Heaven is at hand (Matthew 4:17).  Jesus was telling the people to change their way of thinking for their thoughts were corrupt; and now the Kingdom of Heaven had come near to them, giving them an opportunity to reclaim what had been lost since Adam and Eve.  They had lost the kingdom because of sin.

Reason #2 – Jesus came to restore our righteousness and holiness – Since the whole world had fallen into darkness because of sin, every living soul had been tainted with sin and unrighteousness.  Their right standing with God could only be restored by the death of Jesus on the cross; the only one who could take away our sins and cleanse us by His blood.  To be made righteous is to be in right standing with God by accepting Christ’s death as payment for our sins, and to be holy is to be washed clean by His blood.

Reason #3 – Jesus came to restore the Holy Spirit in man – Only when we accept Jesus Christ as our Savior and be made righteous and holy through His blood, are we fit to receive the Holy Spirit.  The Holy Spirit is the spiritual connection between us and the Kingdom of God.   The Holy Spirit fills us with Spiritual power; guides us; leads us into the knowledge of the truth and brings to our remembrance all the things that Jesus taught.

The Holy Spirit could not come until Jesus had finished His work on the cross, had risen from the dead, and applied His blood for the cleansing of man’s sins: after which we were ready to receive the Holy Spirit (John 20:19-23)

When the Holy Spirit fell upon the disciples and believers gathered in the upper room in Jerusalem on the day of Pentecost, the Kingdom of Heaven was re-introduced in the earth, filling them all with Power from on High.

Today the Kingdom of Heaven is within every Spirit-filled believer in Jesus Christ.

Get your copy of “THE DISEASE” 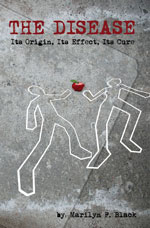